Ducati picks weight over power for 2023 MotoE racer - but is it still too heavy?

“For electric motorcycles, the main problem is the weight,” said Ducati CEO Claudio Domenicali, during last October’s announcement that the Italian factory had won the MotoE contract for 2023-2026.

“And so we have a program in place to make the motorcycle as light as possible. I think that was one of the winning [features of our bid] for Dorna.”

Ducati’s electric diet has so far resulted in a machine weight of 225kg for the new ‘V21L’ prototype, which compares with 260kg for the current Energica machines, which have filled the grid since the FIM MotoE World Cup’s debut in 2019.

That 225kg is 12kg under the target weight set by Dorna and FIM, with a weight distribution similar to Ducati’s other race bikes.

With lap times yet to be released for the Ducati electric bike, weight is currently the stand-out statistic for the V21L compared to the present Energica machines.

Horsepower is currently the same as the Energica (110 kW or 150 hp), while torque is set to be substantially reduced, from the 220Nm quoted for Energica to 140Nm for the Ducati.

Ducati explained that there were two possibilities to meet the required MotoE race distance (6-8 laps depending on the circuit); choose a lighter bike with less battery output, or a heavier bike with more battery output.

Finally, ‘we agreed together that the best option was the first one’.

The main reason was that a heavier weight affects the dynamic behaviour (cornering, braking and acceleration).

Therefore, Ducati challenged itself to ‘make the lightest possible bike’ and ‘understand where we could go in terms of lightness and performance’.

The top speed of the Ducati electric bike is given as 275km/h at Mugello, which effectively matches the 272.7km/h top speed by the Energica at May’s Italian MotoE round.

Other technical details revealed by Ducati include:

Battery pack: ‘Characterised by a shape specifically designed to follow the natural course of the middle area of the bike. The battery pack weighs 110 kg and offers a capacity of 18 kWh with a 20-kW charging socket integrated into the tail. Inside there are 1,152 cylindrical cells of the "21700" type’.

Inverter: ‘With a low weight of 5 kg, [the inverter unit is] derived from a high-performance model used in motor racing for electric vehicles, while the motor (21 kg weight and a maximum rotation speed of 18,000 rpm) was developed by a partner following the technical specifications provided by Ducati. The entire system is based on a voltage of 800V (with a fully charged battery pack) to maximize the output of the electric powertrain and, as a consequence, performance and range’.

Cooling system: ‘One of the most advanced technical solutions tested on the Ducati MotoE. The prototype components are in fact cooled by a particularly sophisticated and efficient liquid system with a double circuit designed to meet the different thermal needs of the battery pack and the motor/inverter unit

This guarantees extreme regularity of temperatures with important benefits in terms of consistency of performance but also in charging times. In fact, it is not necessary to wait for the battery pack to cool to start the process: the Ducati MotoE can be charged as soon as it enters the garage, and it takes about 45 minutes to recharge it up to 80% of its range.’

Battery Pack: ‘The carbon fibre case of the battery pack also acts as a stressed part of the chassis, like the Ducati Panigale V4 engine, with an aluminium monocoque Front Frame for the front area weighing 3.7 kg.

Swingarm: ‘An aluminium swingarm weighing 4.8 kg with a geometry like that of the Ducati Desmosedici racing in MotoGP. The rear subframe, which integrates the tail and the rider seat, is made of carbon fibre’.

Suspension: ‘Öhlins NPX 25/30 pressurised fork with 43 mm diameter upside-down tubes at the front, derived from the Superleggera V4, while an Öhlins TTX36 shock absorber is present at the rear and is fully adjustable’.

Brakes: ‘The braking system is supplied by Brembo and is sized for the specific requirements of the Ducati MotoE. At the front it is composed of a double steel disc with a diameter of 338.5 mm of increased thickness, which has fins on the internal diameter with the aim of increasing the thermal exchange surface area and improve disc cooling in conditions of extreme use on the track. Two GP4RR M4 32/36 calipers with a PR19/18 radial master cylinder operate on this double disc.

‘At the rear, the P34 caliper acts on a single disc unit 220 mm in diameter and 5 mm thick with a PS13 master cylinder.

‘Teams can also choose to equip their bikes with an optional rear brake control positioned on the left handlebar, which the rider can use as an alternative to the pedal one’.

Electronics: ‘The aim was to obtain a throttle response like that of an endothermic unit and a response from the electronic controls (such as Traction Control, Slide Control, Wheelie Control and throttle/engine brake maps) indistinguishable from that of the racing bikes that Ducati riders are used to’

Michele Pirro, Alex De Angelis and Chaz Davies have all been involved in test riding duties with the new machine. 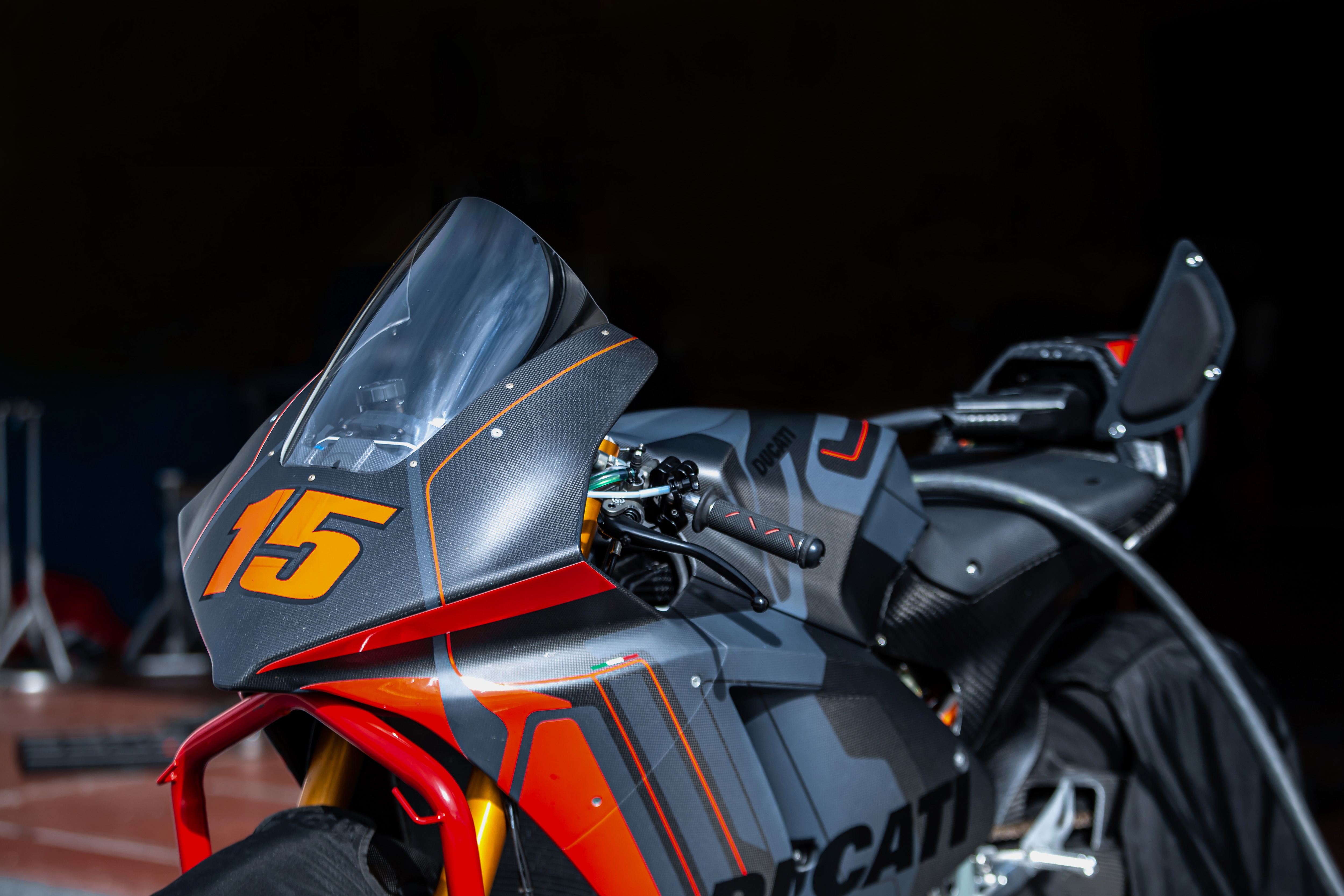 Claudio Domenicali: ‘The result we have achieved is surprising’

"A few weeks ago I had the extraordinary opportunity to ride the Ducati MotoE on the track and I immediately realised that I was living in a historic moment,” Domenicali said.

“The world is going through a complex period and environmental sustainability is an element that all individuals and all companies must consider a priority if we want to preserve the delicate balance of the planet.

“As Ducati, we have grasped this need and we went in search of a challenge that would allow us to contribute to the common goal of reducing CO₂ emissions and at the same time to keep faith with our DNA linked to racing.

“We agreed with determination to develop the most performing electric racing bike that current technology makes possible and to use this project as a laboratory in which to build our future.

“The result we have achieved is surprising. As soon as I sat on the bike I realised the quality of the work done by the team and when I returned to the garage I felt a deep sense of pride for what we were once again able to achieve."

Ducati’s long-term aim is to use the MotoE project ‘to experiment with innovative technologies, train new skills and study how to create, as soon as the technology will allow, a Ducati electric vehicle that is sporty, light, exciting and able to satisfy all enthusiasts’. 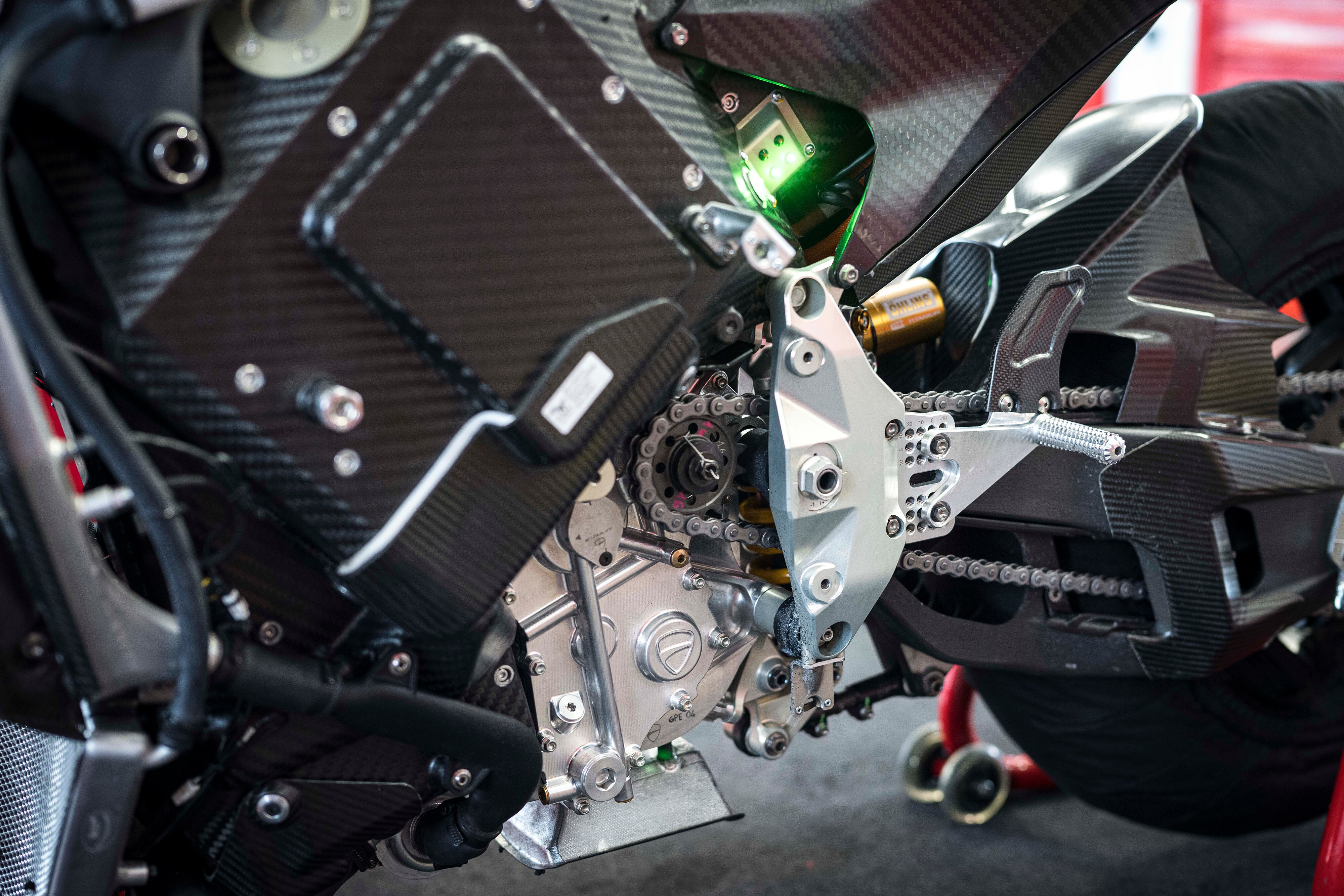 Jorge Lorenzo: Rivalry in MotoGP always fires up the fans