With the penalty verdict issued after Quartararo had completed his media commitments, the Frenchman’s feelings were unknown until he posted the following Instagram story on Monday:

“Well… A long lap for the next race. Now you cannot try an overtake because they think you are too ambitious.

"From the beginning of the year some riders made “RACING INCIDENT” but apparently mine was too dangerous.

“Congratulations to the Stewards for the amazing job that you are doing.

"Next time I will [not] try any overtake to think about not taking a penalty.

“GREAT HOLIDAYS AND SEE YOU IN SILVERSTONE.”

Quartararo, who has only failed to finish two races in the last two seasons, apologised to Aleix Espargaro for what he called a ‘stupid mistake’ in trying to pass the Aprilia rider at the hairpin on lap 5.

The Monster Yamaha star fell during the incident, with Espargaro remaining on two-wheels but being pushed off track. Espargaro lost around ten-seconds, rejoining in 15th place before fighting his way up to fourth.

Suspecting a bike problem due to the accident damage, Quartararo made a pit stop but was sent back out and then suffered a nasty highside on the exit of the same Turn 5, possibly due to a traction control failure.

Although the earlier clash cost Espargaro a potential second MotoGP victory, the 13 points he took from Quartararo’s title lead (now reduced to 21 over the Aprilia rider) was far larger than Espargaro could realistically have imagined if the incident had not occurred.

The Long Lap penalty is likely to cause Quartararo to lose around 4-6 places in the early stages of the Silverstone race.

In explaining their decision, the FIM Stewards released the following statement:

'During the MotoGP race at the Motul TT Assen, an incident between #20 Fabio Quartararo (Monster Energy Yamaha MotoGP) and #41 Aleix Espargaro (Aprilia Racing) saw rider #20 crash and make contact with #41 at Turn 5.

'The FIM MotoGP Stewards panel deemed Quartararo was overly ambitious in attempting to overtake A Espargaro. #20 was not in a position to successfully complete the move and subsequently crashed, causing contact with #41 and forcing him to run wide.

'The avoiding action undertaken by A Espargaro allowed him to avoid crashing and rejoin. Nevertheless, his race was severely impacted.

Quartararo has been given a Long Lap penalty to be served in the MotoGP race at the Monster Energy British Grand Prix.' 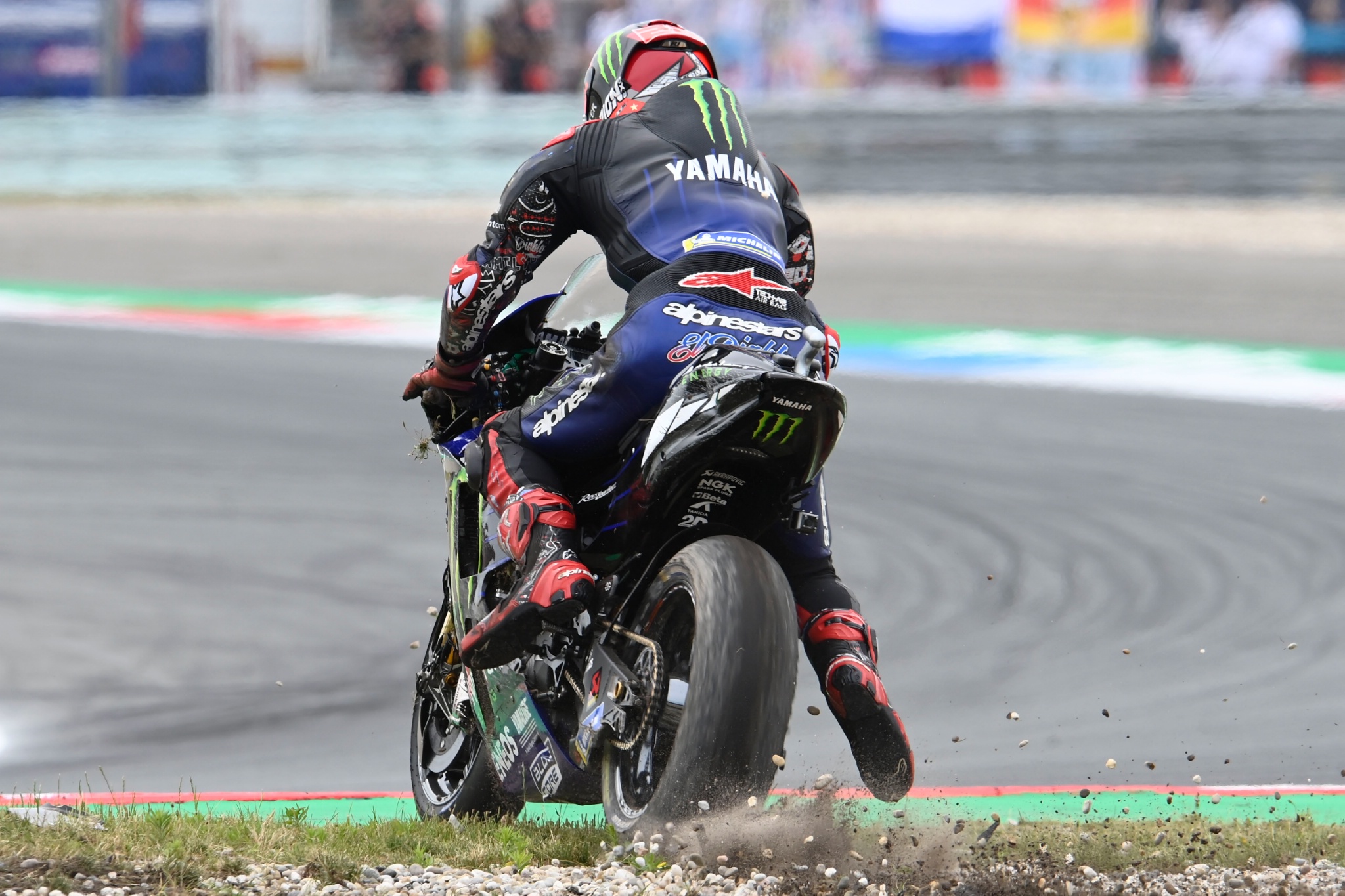 Quartararo’s post follows comments by team director Massimo Meregalli, who labelled the decision to penalise the MotoGP champion as ‘not only harsh, but inconsistent’:

“We view the first crash of Fabio as a race incident and feel that Race Direction's decision to give him a sanction for the next race is not only harsh considering he took nobody down with him and Aleix still scored points, but it's also not consistent with race incidents we've seen in earlier GPs that were left unpunished.”

Meregalli appears to highlight that no penalty was handed down to Takaaki Nakagami for triggering a multi-rider accident, including a wrist fracture for Alex Rins, in Barcelona.

A startline incident at Assen between Joan Mir and Luca Marini, which left the Italian with a broken wing, ruining his race, also went unpunished.